FALSE BREAKOUT - MARKET DECEPTION WHICH YOU SHOULD MAKE MONEY OFF OF

A lot of Forex traders prefer trading with help of important levels. They often come across false breakouts. You can safely say that the false breakout (FB) is something that every trader who uses this strategy deals with.

An important level is a place on the chart, where the price bounced off for some time or where there was its horizontal trend.

The place where the price stopped below the current values is referred to as support, and the one above is called resistance. This type of trading allows using minimum risks in the course of trading. Also, there are places where one can place a smart stop loss and take profit order.

How false breakout is being formed

In the market, the price moves from support to resistance levels, and thus is able to break them out or bounce off them; however, FB is very common. The majority of traders prefer selling on top, and buying on the bottom. False breakout is when the most market players are being deceived.

At this stage, the support or resistance levels are being tested. If there are big players in the market who are ready to move the price in the current direction, this will be a true breakout, resulting in continuance of the current market trend.

By the FB of the level, big players push the price behind the level, sending the rest inaccurate signal for its continued movement. At this point, they begin accumulating position in the opposite direction at a more favorable price.

Once the required volumes are accumulated, they receive their profit thanks to the stop loss of the majority of players, since the price goes in the different direction following return under the level. 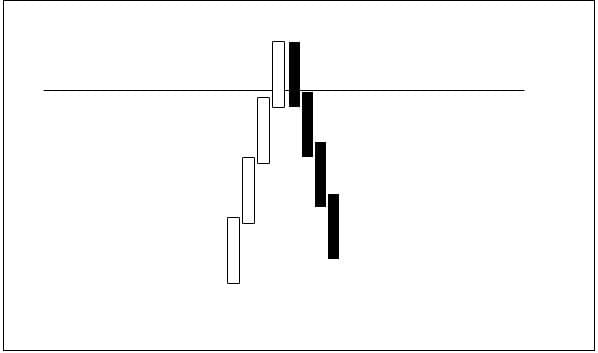 In order to avoid such a market trap, the trader has to use VSA or price action pattern in the course of trading. These strategies allow identifying the actual intentions of the big Forex players.

Types of false breakouts in the forex market

There are only three types of FBs in the exchange market, depending on the place they have been formed.

Now let's attempt examining each of these breakout types separately. The classic FB is formed with a trend movement and consists of 1-4 candlesticks. This trap is formed at important levels of support and resistance.

Typically, prior to such a false breakout, the price aggressively moves towards support or resistance. As a result, many players expecting the level breakout and further price movement in the current direction find themselves in a trap.

Unlike the first-case scenario, in the second one, the price has been in consolidation for quite some time. Hoping to escape the trap, the traders open positions, once the breakout has been formed. If the breakout occurred upward, it is a bull trap, if downward it is a bear trap.

The major mistake made by these traders is that they have not waited for a breakout confirmation signal, and eventually incurred losses.

How to trade false breakouts in the forex

Irrespective of the type of FB type occurring in the market, this is a clear signal for further price movement in a different direction. To trade properly, you need to wait until it returns under the level again.

A lot of traders prefer to wait for a small horizontal trend of the price near the level.

The position opens in another direction from a false breakout. In such a case, the stop loss order is placed behind the level, above or below the consolidation, depending on the market price direction. Take profit order should be placed under the nearest level on the chart.

A false breakout in the forex market is a very common signal which points to the fact that the direction of the price movement has changed. It is a kind of crowd deception of sorts, since a lot of players jump on a trade as soon as the breakout happens, without waiting for it to get confirmed.

As a result, they incur losses, since the price has changed its direction and returned under the level again. At this point, stop loss order of many players gets activated, and as a result, the price goes in the opposite direction following a false breakout.

In light of this, we can safely say that a false breakout is a signal indicating a change in the current direction of the price movement.

In order not to get into this trap, you should use either VSA or price action patterns allowing to get the actual picture of what is currently happening on the market. Thus, when using VSA, there is a high likelihood of a false breakout occurrence, if the breakout happens without volumes.